My OH and I went to see an amazing exhibition of the 19th-century artist Utagawa Kuniyoshi’s woodblock printed art work at the Royal Academy of Arts in London last week.

It was a fascinating exhibition and Kuniyoshi’s art and design is amazing and has obviously influenced comics and manga of today.

Kuniyoshi was a master of the Ukiyo-e, or ‘floating world’, school of Japanese art which seems to have focused on the hedonistic side of life that was very in vogue. It seems that there were over 400 publishing houses in Edo (Tokyo) at this time and they would hire artists to draw designs on various themes, including legends, stories, adverts for sponsors or even drawings with strict moral messages as imposed by regulations of the times. These artists were seen more as craftsmen (and women) with a product than artists and their drawings and designs were bought for mass production through woodblock printing.

The line drawings from the artist were layered onto a woodblock and carved by extremely skilled craftsmen, destroying the original line art in the process. A first print would be made and the artist would decide what colours would be used and where. The carver would then carve another woodblock for each of the colours to be used. Another skilled craftsman would then ink the woodblocks and print a colour at a time to build up the final print. The woodblocks would be used time and time again and often the later prints would be well worn in comparison to the first prints to come off of the blocks.

But the details achieved were outstanding. 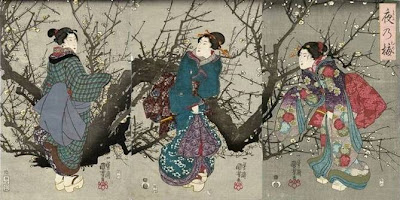 They would also use other papercrafting techniques in some of the art work such as ‘blind’ or dry embossing and adding metal powders to give a luxurious sheen to the piece. The wood grain from the woodblock would also be used to add a pattern to the picture such as texture to a kimono for example.

The skill of Kuniyoshi, his school and the craftsmen involved was just incredible. There is an online gallery of his work at the Kuniyoshi project.

The Card That Wanted To Be A Bookmark